Provista Blog > What Are The Effects of Having Extremely Dense Breasts?

What Are The Effects of Having Extremely Dense Breasts?

Breast density can considerably influence the precision of routine methods of detection, such as screening mammography. All imaging modalities rely on visual interpretations of a woman's breasts, and for patients with dense breasts that visual interpretation can be confounded by increased glandular tissue, obscuring cancers. In particular, women with extremely breast dense, which makes up about 10 percent of women, have a higher likelihood of developing cancer and receiving a later diagnosis. This occurs because deciding between healthy and dense breast tissue and cancer is extremely difficult, as both appear white on imaging, this is often likened to trying to spot a polar bear in a snowstorm.

50 percent of women have dense breasts.

What is dense breast tissue?

Dense breasts have less fatty tissue and more non-fatty tissue. Breast density can be inherited, therefore, if your mother has dense breasts, there is an increased likelihood you will also have dense breasts.

It is not exactly clear why some women have dense breast tissue and others do not.

Though it may be more likely to have dense breasts for:

What tests are recommended for breast cancer screening?

Mammograms are recommended as a first-line breast cancer screening in women with dense breast tissue. Women with dense breasts, but no other risk factors for breast cancer, are considered to have an average risk. Despite this, mammography relies on a visual interpretation of imaging results that are often confounded by dense breast tissue, this is particularly problematic for the 10 percent of women with extremely dense breasts. Women with Category D, or extremely dense breasts have more glandular tissue (which appears white on mammograms, similar to cancer) than fibrous tissue. In over half the country, legislation has been enacted to ensure women are aware of their density status. However, supplemental tests are not required or necessarily covered across the country.

There are clear advantages and disadvantages to each set of diagnostic imaging test. However, there is no simple, cost effective solution for women with dense breasts to obtain a definitive detection status through imaging. For women with an abnormal or unclear imaging finding, utilizing a complementary blood-based approach in addition to current standard-of-care could aid in early detection or help rule-out breast cancer irrespective of breast density. A blood-based approach would allow for detection to be based on physiology, rather than anatomy, while being cost effective to patients. This would also reduce stress and uncertainty to patients with both heterogeneously dense and extremely dense breasts and their families. 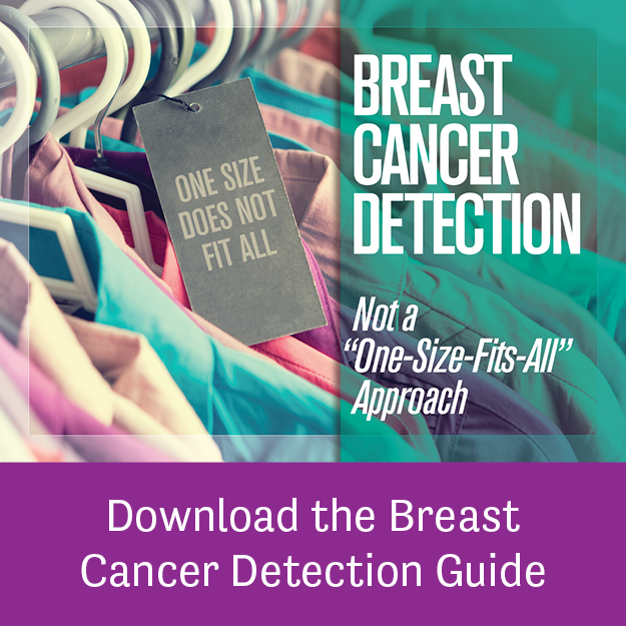