In order to understand breast cancer survival rates, we must first look at the "relative" rate of survival. Relative survival rates are an estimate of the percentage of patients who will survive for a given period of time after a cancer diagnosis. It differs from observed survival in that it accounts for deaths from other causes by comparing survival amount cancer patients to survival amount people of the same age and race who have not been diagnosed with cancer. Because survival statistics are based on large groups of people, they cannot be used to predict exactly what will happen to an individual patient.

Based on recent data, relative survival rates for when after being diagnosed with breast cancer are:

Survival is lower amount women with a more advanced stage of breast cancer at diagnosis. Considering all races 5 year relative survival is:

Larger tumor size at diagnosis is also associated with decreased survival. For example, among women with regional disease:

This demonstrates that we must aim to catch all cancers as early and as small as possible. Imaging's limitations can cause this to be a challenge in women with difficult to interpret findings, causing cancers to be either falsely diagnosed or missed. A missed cancer or false negative can result in increased costs to the patient and health care system as well as, decreased survival as the breast cancer was not caught as early as possible.

So, how can we combat imagings limitations to ensure the highest chance of survival for all women?

To do this we must look at this problem in a new way and think outside of the box. If we were to add a blood-based approach to the current standard-of-care, we could complement imaging by adding another step into the breast cancer diagnosis process. This extra step would aid in detecting breast cancer in patients, independent of anatomy or family history allowing for patients with unclear imaging results and/or dense breasts to gain a definitive answer from their healthcare professional at an earlier stage. Thus, allowing for us to detect breast cancer earlier and more accurately. This would not only help alleviate the anxiety and concern associated with breast cancer detection, but help reduce the total number of unnecessary biopsies and invasive procedures. Furthermore, this will increase patients chances of survival as breast cancers by detecting cancer at an earlier and smaller stage. 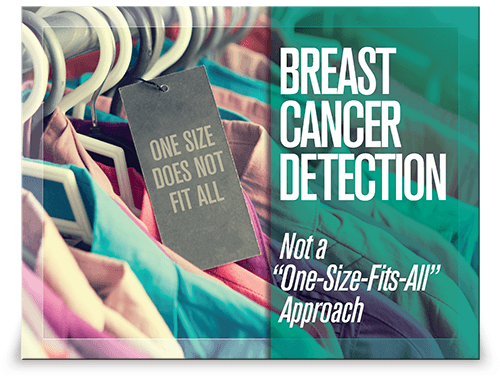